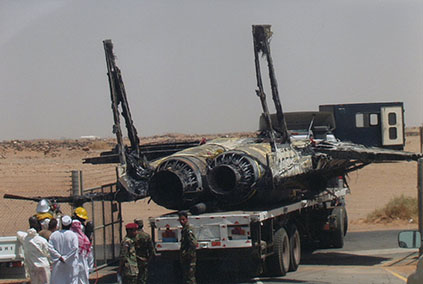 When I was deciding what to do with my life, I made the conscious choice to join the military. Two reasons were: I wanted to serve my country and put money away for my education. I went to the Marines in San Diego and was considered a “Hollywood Marine.” Believe it or not, I chose the Marines because of the uniform. Most people would have done their research but I actually liked the uniforms and I later learned that there was so much camaraderie in the Corps it was almost like a fraternity. So that was kind of cool. I loved the Marine dress blues, and also being labeled as an elite unit was important to me as well.

I was a weapons specialist belonging to a weapons platoon, so we had the Mark 19 grenade launcher and 50 caliber squad automatic weapons. That was what we did. We were infantry; we went in, did a lot of forced marches and work in the field. It was good because you become really close to the person next to you in a foxhole. It was challenging to go into combat environment as a squad leader.

I later became a non-commissioned officer. During that time, I went to NCO school and was actually attending college. My final station was in Hawaii. So that was kind of fun, although I was not there very long. After that I was with 1st battalion 3rd Marine 50 unit. That place was unique. It gave me an opportunity to serve my country, which I’m proud I’ve done. I’m a decorated combat veteran: good conduct medals, sea service deployment ribbons, combat action ribbons and a number of equated liberation medals. My rank at the time of my discharge was a Corporal NCO.

Combat? That’s what they sent us over there for. We were in Task Force Ripper and Task Force Poppa Bear, we were a blocking force and then we went into Kuwait It’s something as Marines we really don’t talk about. We did what we needed to do, and a lot of that stuff you just end up taking with you. It’ll never leave you: you’ll have it for the rest of your life. Fireworks tend to have a huge impact on me, and I don’t enjoy them as much as others enjoy them, I’ll just say that.

While in Iraq and Kuwait, it’s very, very cold at night. Temperatures are extreme, so it’ll be severely hot in the day to the point where there’s a lot of restricted movement. At night the temperatures can get so cold because there’s nothing to hold the heat. You have to stay hydrated and things like that. There’s the factor of being away from your family and being exposed to different cultures. There are different ways of doing things in other nations. In America, we have this perception that our way is always the right way, but you have a chance to be exposed to the way other people live their lives. And it’s not right or wrong, it’s just different from the way we live.

Back in Kuwait, I loved the games for field day and competition with the other units. That was fun. Receiving care packages was always exciting. My wife wrote me every day – I was never short on letters I got. It was an average of four letters a week. When you’re over there, that’s all you got, so mail call was always an exciting time.

When we returned, we were fortunate. We came back to Hawaii and a ticker tape parade. It was a hero’s welcome. We came down Main Street, then over to Leeki Leeki. To make it even better, my wife was waiting for me in a hangar. It was the most unbelievable moment of my life.

While in the military I picked up leadership attributes, organizational skills, communication skills, setting goals, understanding that the group is more important than any individual, believing in a cause, and working with diverse groups of people. I believe all of those skills are very transferable when transitioning to civilian employments. A refusal to quit is another skill the Marine Corps teaches you, a way of persevering through adversity, just continuing to push forward and move forward, even when the odds may be stacked against you.

Has my opinion of the military changed? Yes it has…I actually wish I was back in! When you’re in the Corps, you definitely don’t appreciate it as much as when you get out. Then you realize how good you had it and you realize you actually enjoyed it more than you thought you would after leaving. I did not necessarily miss all of the field work, but I definitely miss the people: the experience of working together…the sweat of being a part of something special.

All military people are never alone. Sometimes we may think that we’re alone, but you’re always a part of a band of brothers and I’ve never met anybody in the military who was a stranger. Once they identify you as having served, it’s like you’re old friends.