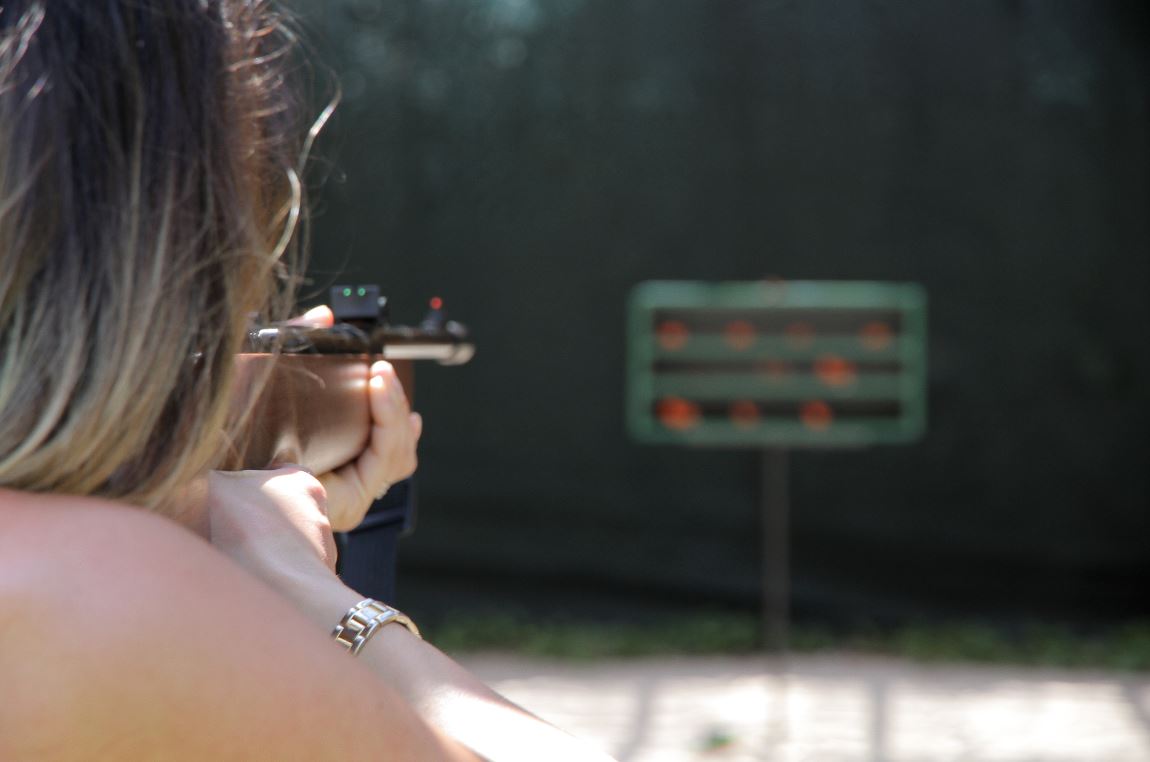 Maiden Visit to a Gun Range

By Deborah Gantos and Raina Kuptz

Deborah: You never know where your life will take you. Haven’t you heard this observation at least a few times in your life? That was the thought that entered my mind as I walked into Peacemakers indoor gun range in Howell, Michigan. My deputy editor, Raina, and I decided to write a story about women and firearms. Since neither of us had ever even held a gun, this was definitely a first-time experience for both of us.

It was a Monday afternoon and there were not too many people at the range. Hallelujah! The large room was rustic and very dark, with no windows. There was a long counter with three or four people behind it, and the entire back wall was covered from top to bottom with all kinds of weapons. There were tons of rifles which a gun enthusiast would be able to name without hesitation. Me, not so much. In front of the counter were glass cases with a large assortment of pistols, handguns and boxes of ammo. One small area in the main room also displayed apparel, hats and other products for their customers to buy, many of them that are probably stocked in your stores.

We approached the desk like two deer in the headlights, and I introduced us and gave the owner a copy of our magazine. I explained that we were writing a story and asked if could someone show us what to do and learn as our first day as “gun students.” The owner introduced us to Drew, who was a mountain of a man who would be even more intimidating with a weapon in his hand. Drew then smiled and was the kindest, most patient teacher.

Raina: It was reassuring to note there were two women behind the counter the first time we went to the place, so I didn’t feel like I was walking into a men’s gun club. The staffer was professional and polite, and asked us if we’d ever done this before. We answered no, and he explained that they would walk us through everything. We had to fill out and sign a waiver with rules and agreements, and submit our driver’s licenses; they immediately did a background check for any legal issues. Drew explained that we would should start out with a smaller gun, a .22 semi-auto pistol, since it doesn’t have as much recoil. He let us pick up and hold a Ruger and a Smith & Wesson.

We got safety gear – eye and ear protection – and then he explained the rules of the gun range. Guns were to be taken into and out of the range area in their basket or in a case, not in hand. When not in use, the gun should be laid down in the particular lane. He explained the double doors to the range area were to prevent excess noise. He told us the first set of doors would be closed before the second set was open, and that it would be noisy. So, fully equipped and armed, we entered the range.

Deborah: Drew gave us a target and positioned it closely enough that we would at least have decent odds of hitting it. First, we learned how to load a pistol. We were also cautioned not to place our thumb near the bottom edges of the slide or we would get “snake bit.” For those of you who have not heard this term, it means the mechanism can potentially cut your skin and maybe even cause bleeding. There seemed to be many steps on where to position your hands. By now, I started getting pretty anxious. Next, we were told how to stand, leaning slightly forward, with knees bent and two arms stretched out. Finally, the big moment: pulling the trigger. Those of you who know guns, you probably remember the first time you fired one. Drew cautioned us that it would set off our adrenalin and to be prepared. I found it was pretty easy to squeeze the trigger but the noise was pretty loud. After I fired a round, I found myself shaking. Drew was right. Now it was Raina’s turn. Boy, was I relieved.

Raina: The target was fairly close to us, and we were fairly accurate. Although accuracy wasn’t important for us, learning the motions and steps was. I assume it becomes muscle memory in time, like driving a car or riding a bike. Learning those initial “instinctive” steps feels awkward and you have to think about every step as you go.

My challenge was learning to use my dominant eye to aim; additionally, I had a little bit of trouble when loading so that the round chambered properly. Finally, the pistols we used tended to jam frequently, probably because they are the weapon equivalent of bowling alley rental shoes. I imagine you get a feel for your own guns considerably better.

We went through a pack of 50 rounds of ammunition. The spent shells flew around with each shot, leaving the brass all over, which is swept up later. One bullet did not have the lead in it. Apparently this sometimes happens, and it just won’t fire! They don’t show this in any cop shows.

Second trip to the gun range

Deborah: On our second trip, we had a woman instructor named Brittany who taught us all the intricacies of shooting a Sig Sauer .238. I found handling a larger, different gun was a bit intimidating, compared to the smaller .22, I felt it was easier to handle. The larger caliber weapon was WAY louder and had more recoil. Again, I felt there was so much to remember and since this was a different gun, it was a bit different procedure. One thing we learned is to always point the gun down range. I kept putting the safety on just in case.

The .238 was much harder to load. I felt klutzy trying to hold the clip, squeeze the mechanism and push the bullet into the slot. Brittany brought us an automatic loading device, which was much easier. I was so anxious trying to remember all the steps, that I tried to put the bullet in the wrong way…how embarrassing! Having a kind, patient instructor is really important in order to encourage someone new to firearms to keep trying.

Raina: I would guess that many women might want to carry tiny guns such as a derringer, but they’re actually snappier and have more jolt to them. Double that with a higher caliber and the noise and feel are noticeably different. The speed loader was cool to try out. Loading the clip takes some practice as it is.

I wasn’t as anxious this time around because I had taken a half-day class at a larger gun range where they taught us safety and let us fire different weapons, such as rifles. Now I have a better grasp of what I am doing and know I haven’t made any big mistakes yet in handling or firing a gun, and I know what to expect by now. I don’t anticipate owning/carrying one for self-defense unless I am utterly comfortable handling and firing it.

Deborah: Brittany told us it is a good idea for beginners to practice on a .22 to learn the mechanics and muscle memory of all the steps in loading, handling and shooting a gun. She also said a .22 is not that good for self-defense; once you learn on the smaller caliber, buy a larger one for better protection.

What I learned most of all is that a gun is a powerful, fatal weapon if it is not handled properly and safely. It needs the utmost respect and the person firing it has to take the responsibility of learning how to use it, maintain it and keep it safely locked away when others who do not know how dangerous it is are around.

More and more women are learning how to use firearms to protect themselves. It would be a wise idea to notice this trend and take steps to leverage this population.