Sapphires on The Battlefield?

The quest for invisible armor.

When we think about sapphires, we generally think of the beautiful blue gem women wear adorning rings or necklaces. However, when the military thinks about sapphires, beauty is the last thing they consider. That’s because the military’s application for the gem is a synthetically produced, pure sapphire that is as transparent as glass, rather than the iconic blue we see in jewelry.

In fact, synthetic versions of the gemstone are already in use by the military. They are being used in the form of new transparent armor that is lighter and thinner, and can pulverize bullets on impact. State of the art jets and missile launchers equipped with the transparent armor are already on the battlefield. Furthermore, the military sees unlimited potential to also use the invisible armor to even protect troops on the ground.

How is it made? 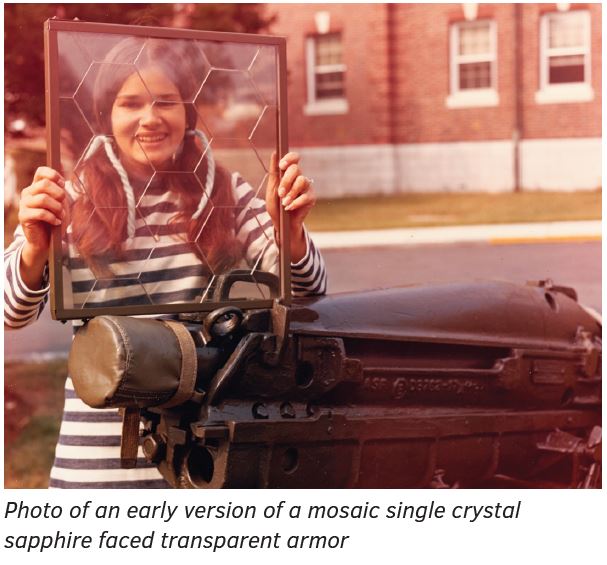 The sapphires are man-made and are formed by aluminum oxide crystals. While impurities in the natural stone explain its signature blue hue, those that are pure sapphire are translucent. We know that diamonds are extremely hard stones; sapphires are just beneath them in terms of hardness. Thus, when bullets are fired at sapphire armor, the rounds shatter or are pulverized on impact.

The synthetic sapphire transparent armor is made by Saint-Gobain Crystals. The product has the potential to be a superior ballistic protection application, replacing the glass in ground combat vehicles, helicopters, military bases, and even glass used by ground troops. Saint-Gobain has developed a technique to produce very large sheets of the armor, making the product available for unlimited applications. Sapphire armor is also heat resistant. The aluminum oxide is heated to 3,700 degrees Fahrenheit and the molten liquid is then poured into a container. Compared to traditional bulletproof glass, sapphire armor has less weight, less thickness and higher visibility, and pulverizes bullets.

Sapphire has the ability to sustain more wear and tear, and depending on the thickness of the piece, it can defeat a wide range of munitions. It is also able to improve visibility when using infrared. The product is presently being used for an Army rocket launcher system, the Army’s High Mobility Artillery Rocket System. The problematic mylar glass windows were replaced with the new material, which cut down on the pits, dents and scratches caused when firing off rockets. The crews on the rocket launcher are now better protected from enemy snipers and other combatants as they operate behind the sapphire transparent armor. The strike face material is extremely hard and can shatter a 7.62mm round on impact. It’s much easier to handle and does not scratch even if you were to rub a piece of sandpaper across the surface. The rocket system has been used with great success recently in Syria.

The ballistic properties and high visibility of the new armor makes it ideal for face shields worn by ground troops. When a bullet strikes the transparent armor, it shatters into bits. The bullet’s steel core is no match for synthetic sapphire. The layers added to the sapphire sheeting enable the shield to also absorb the energy of the incoming round. The armor can withstand multiple strikes.

Helicopters and other applications

Always a target, helicopters regularly take small arms fire on their many missions supporting ground troops. Whether dropping troops into an area or performing medical evacuations, helos are an easy target. With enhanced sapphire protection, aircrews can perform their missions in a much safer way. Other applications to consider: eye protection, ballistic shields, windows in military bases, and windows in ground vehicles.

Think about what happens when you’re driving your car and suddenly a rock or stone hits your windshield. The impact may cause damage that makes it difficult to see where you’re going. With the transparent armor windshield, the damage is limited only to the spot where the strike occurred. That means if your military vehicle’s windows are struck by a bullet, the product retains its transparent nature.

But it’s not just the military that can benefit from sapphire armor. Because it’s lighter, items such as ballistic shields used by the police can be applied more often and with greater flexibility. And it doesn’t just protect against bullets, it’s also an effective defense against edged weapons as well. We know terrorists have increasingly employed edged weapons against police, particularly in Europe.

Building walls, while a contentious subject presently in the United States, is an effective way to protect people and property. The biggest problem with walls is the aesthetics of the structure. A wall blocks the view of people on either side of the structure. Now, think about an invisible wall—one that can stop both people and vehicles from entering certain buildings or areas. Paris is considering building a wall around the Eiffel Tower to protect it from terrorists. Their objective is to prevent shootings and stop bomb-laden vehicles before they gain access to the attraction. A transparent wall means tourists can still enjoy the beautiful tower while being protected from terrorist attacks.

Space exploration may also benefit from sapphire, which can withstand extreme temperatures without losing its integrity. Particularly on re-entry, NASA advises the external surfaces of spacecraft can reach a temperature in excess of 1,500 degrees Celsius. A sapphire nose cone would ensure the integrity of the vehicle.

Sapphire on the battlefield? You bet … and beyond.