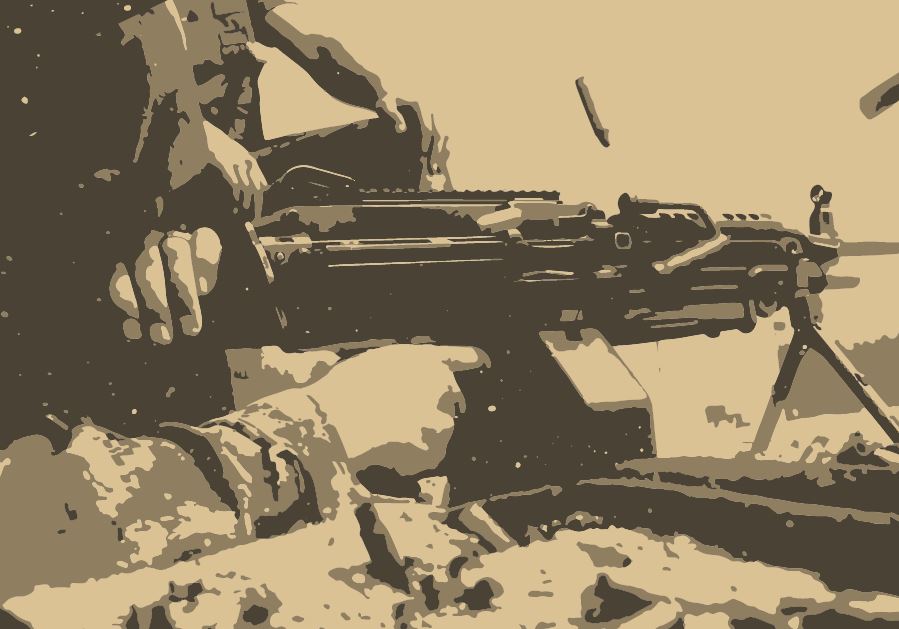 Like all organizations, the military is constantly seeking ways to accomplish their mission more efficiently and quickly. To that end, the U.S. Army has taken a closer look at their infantry’s weapons and has come up with an innovative new idea. Presently, the Army uses what’s known as the M249 SAW (squad assault weapon). The SAW entered service in 1984 serving as a light machine gun. It fired effectively when placed on the ground with a bipod, but it was not as effective when fired from the shoulder or hip. However, the SAW was durable and offered superior firepower.

Critics of the SAW cited its exposed hot barrel and sharp edges as unacceptable. Some also complained about the front sight requiring special adjustment tools. Those complaints were eventually addressed when the weapon was retrofitted with a production improvement program. The M249 has always been praised for its accuracy and reliability, however.

What to expect from the next generation squad automatic rifle

Fast forward to the present and we find the Army now seeks to replace the SAW with a new assault rifle which will be lighter and more powerful. Known as the Next Generation Squad Automatic Rifle (NGSAR), it will weigh less yet shoot farther making soldiers more lethal and enhance a squad’s speed and mobility. According to a July Fox News report, “The Army’s new weapon will look like a light machine gun, but will put M1 Abrams Main Battle Tank-style blasting power literally at the fingertips of U.S. soldiers.” Amazing.

Stars and Stripes newspaper reports that a federal contract posting went out in August 2017. Five contractors answered the posting and each will build prototypes to submit to the Army for testing. The proposed NGSAR is to weigh no more than 12 pounds and have a maximum length of 35 inches. It must have a sustained rate of fire of 60 rounds per minute for 15 minutes without requiring a barrel change. According to military.com, writer Matthew Cox, under the weapon’s controllability requirement a soldier “firing standing with optic at a 50-meter E-Type silhouette given 3 to 5 round burst, must be able to engage in 2-4 seconds placing two rounds 70 percent of the time on target.” In addition, the ammunition must weight 20 percent less than the current brass-cased ammo.

The new machine gun will hit like a tank

What’s revolutionary about the NGSAR is that it will be even more powerful than the already beast-like SAW. The new weapon’s chamber pressure will mimic the level similar to that of battle tanks. That means that engaging a threat even 2,000 feet away the NGSAR will blast through enhanced body armor. Distance, accuracy, ergonomics, and lethality are all expected to be improved. The new specially designed, harder hitting and light weight ammo gives the weapon an added advantage.

How is this possible? The rounds will be fired at pressure levels similar to those achieved by tanks. That means soldiers can fire rounds from a greater distance, thus keeping them safer. In Afghanistan, firefights with Taliban insurgents often happen at ranges of more than 600 yards. The Army’s goal is for the new weapon chamber pressure to be between 60 and 80 KSI (kilopound per square inch). In comparison, the Army’s M1 Abrams main battle tank fires at that same chamber pressure. Military assault rifles KSI is around 45, significantly less than the proposed new weapon.

If you’ve ever been in the military and been an infantryman, you know that every piece of equipment you carry means more discomfort and decreases your ability to be mobile. The old SAW weight is 17 pounds when empty. The NGSAR will weigh less than 12 pounds. The SAW has a 20-inch barrel versus the NGSAR’s total length of 35 inches, five inches shorter than the SAW total length. Ammunition weight will also help the infantryman move farther quicker, it will be 20 percent lighter. The new ammo must have sufficient speed and enough mass to be effective against enemy forces protected by body armor. Presently, the 7.62mm ammo has too much mass and not enough propellant, The 5.56mm ammo has the opposite problem, not enough mass.

The old SAW will not disappear

U.S. Army Lt. General Ostrowski told military.com that the NGSAR is not for every soldier. “We are looking at it for 100,000 close-combat soldiers.” The Army started the NGSAR as a major priority for the Army’s Soldier Lethality Cross-Function Team. The CFT is part of the service’s new Futures Command whose main objective is connecting service members, subject matter experts, and industry representative to explore and develop new systems and technologies across a number of different functional areas.

The old reliable SAW isn’t going to disappear completely. SAWs have proven effective in combat theatres facing enemies unprotected by armor. The problem is new threats from nations with advanced defense programs such as China and Russia that equip their troops with armor. It’s vital that we equip our forces with weapons that can defeat body armor. The enhanced power and range of the NGSAR will enable the military to move lighter and travel faster. Depending on how the prototypes test, the new powerful weapons could be in the hands of soldiers as soon as 2022.